Ontario Basque Club will be celebrating 72 years at its annual dinner, dance, and auction on February 23rd at the Four Rivers Cultural Center. Doors open at 6:00 with dinner served until 7:30.  Participants in a dance workshop for txikis will show off what they learned at 7:00 followed by a performance by the Beti Alai dancers at 7:30 and the live lamb auction at 8:00. There will also be a silent auction. Proceeds benefit local community projects. There will be dancing to the Boise band, Simple Ruckus beginning at 9:00pm. 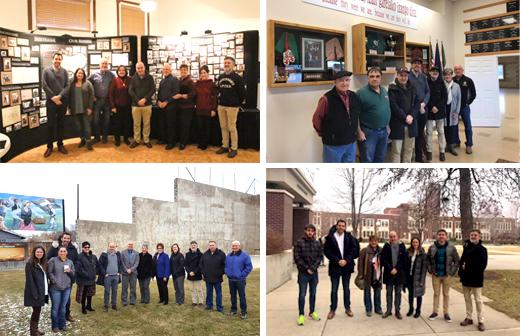 Gorka Alvarez Aranburu, Director of the Basque Government’s Basque Communities Abroad, came to the United States to attend the N.A.B.O. Winter meeting held in Salt Lake City last weekend, among other events.   One of the goals of this visit was to introduce the newly appointed Delegate of Euskadi in the US, Jorge Fernandez Quintela, to some of the communities and clubs that comprise the federation.  As such, after the meeting in Salt Lake, Aranburu, and Fernandez, accompanied by Benan Oregi, also from the department of Basque Communities Abroad, traveled to Boise. Once landing in Boise, they didn’t have much chance to rest.  The delegation began their travels on Monday to Ontario, Oregon to visit the Ontario Basque Club facilities and board members.  From there, they moved on to Homedale to visit the Txoko Ona Basque Club as well as board members there. They then returned to Boise where they  attended a meeting with the Jaialdi committee, followed by practice for the Santa Ageda event later that night. Tuesday began with a trip to Mountain Home to visit the Basque club and various Basque landmarks there. The delegation then returned to Boise to visit with the faculty and staff at Boise State’s Basque Studies Program.  The delegation will also visit the Gooding Basque Club, as well as hold meetings with various officials at the local and state level.  They will then spend the weekend in San Francisco to celebrate the San Francisco Basque Cultural Center’s 37th Anniversary. On behalf of everyone at N.A.B.O. we would like to welcome Jorge and wish him the best of luck in his new post.  We also extend our gratitude to Gorka, and Benan for their efforts in favor of our Basque communities, as well as for their time allowing everyone to get to know each other better. Eskerrik Asko!

As previously mentioned the N.A.B.O Winter meeting took place last Saturday, February 9th in Salt Lake City, Utah hosted by the Basque Club of Utah. The meeting included representatives from 34 of the member clubs that comprise the federation, along with Gorka Alvarez Aranburu, Director of the Basque Government’s Basque Communities Abroad Department, along with Benan Oregi from the same department; Jorge Fernandez Quintela, Delegate of Euskadi in the US; as well as Jasone Agirre, Basque Parliamentarian.  Other guests attending included Joseba Etxarri, director of EuskalKultura.com, among others.  The meeting’s full agenda made for a long meeting, but it was all worth it since delegates were treated to a wonderful lunch prepared by the famed cooking crew at the Utah Basque Club led by Jean Flesher.  Saturday evening also marked the club’s annual dinner/dance, a favorite among N.A.B.O. delegates and locals alike.  The sold out event, included dinner, raffles, a silent auction and a wonderful dance performance by the Utah’ko Triskalariak directed by Cirbie Sangroniz, who is also serving as the club’s President. The evening also provided an opportunity to catch up with former N.A.B.O. president and longtime delegate, Mary Gaztambide.  On behalf of everyone at N.A.B.O. we would once again like to thank the Basque Club of Utah for hosting this event.  A small community that continues to surpass expectations.  Mila esker handi bat! Biba ziek!