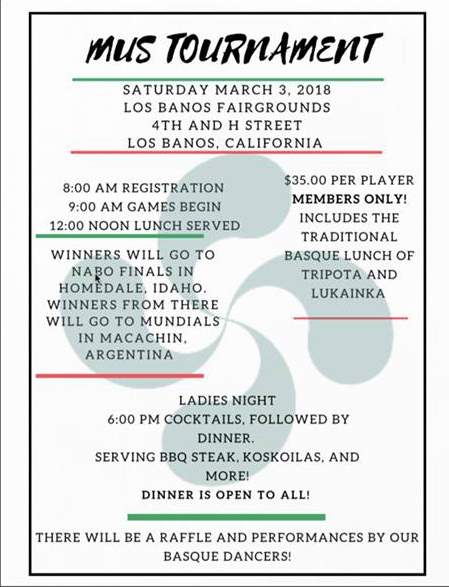 The Los Banos Basque Club would like to invite everyone to its annual Mus Tournament and Ladies Night, on March 3 at the Los Banos Fairgrounds. Registration for the Mus Tournament will begin at 8am with tournament play beginning at 9am. Cost of the tournament is $35, for members only, and includes a traditional lunch of tripota and lukainka. Local winners will then go on to represent Los Banos at the National Mus Tournament at the Txoko Ona Basque Club in Homedale Idaho in June, and winners of that tournament will go on to International Mus in Macachin Argentina in the fall. After the tournament, stick around for Ladies' Night. Cocktails will be at 6pm followed by a steak dinner. There will also be raffles and a performance by the club's dancers. For more information, visit them on Facebook or email: volano@clearwire.net.

Reno's Zazpiak Bat Basque Club will host its annual Mus Tournament and Pot Luck on March 3, 2018 at the American Legion Hall (877 Ralston Way). Tournament registration begins at 8am with play beginning at 9am. Preregistration is highly recommended, and can be done by filling out the registration form. Cost of the tournament is $25 per player, which includes coffee, pastries and lunch. You must also be a paid-up member of the club to participate. Dues are $20 for singles, and $30 for families. This tournament always coincides with the club's March Potluck. This event will begin at 11am and will include performances by the club's Zazpiak Bat Dancers, lunch, a cakewalk and bingo. There will also be chorizo and cheese available for purchase in the afternoon. For more information on all of these events email: renboasqueclub@gmail.com.

As many of you know, the San Francisco Basque Cultural Center celebrated its 36th anniversary last weekend. The three days were jam packed with activities ranging from pilota, to art exhibits, book presentations, and lectures. There was something for all ages and interests that is for sure! The festivities also coincided with the mid-term World Congress Meeting with the Basque Government on Friday, and NABO's winter meeting that took place on Saturday. Friday's meeting gathered some 30 individuals from all over the North American Diaspora including Canada and Mexico, as well as representatives from St. Pierre et Miquelon. The gathering was presided by Gorka Alvarez Aranburu, the Basque Government's Director of Basque Communities Abroad, with Benan Oregi, technician from the same department, and long-time NABO friend, leading the discussion. Saturday's meeting was presided by NABO president, Annie Gavica, and gathered representatives from some 38 of NABO's member organizations, along with the Basque Government representation. After taking care of business, delegates were then free to enjoy the rest of the weekend's festivities, including the presentation of NABO's Bizi Emankorra Award to former NABO president, and current NABO vice-president, Valerie Etcharren Arrechea. Her contributions on the local, national and global level are too numerous to count, but are summarized here in the award presentation by NABO president, Annie Gavica. A video prepared by Jean-Paul and Liz Barthe of the presentation is also available below. Berriz ere, Zorionak Valerie! Biba zu!