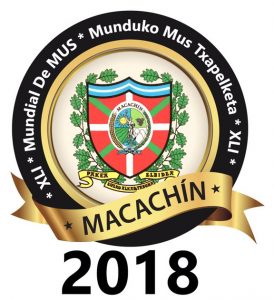 The 41st edition of the World Mus Championships concluded on Sunday in Macachin, Argentina hosted by the Euzko Alkartasuna Basque Club. At the end of tournament play, the team representing Navarre, Jaione Otxandorena and Timoteo Echeverria took first place. Jaione also took away the honor of being the first female champion in the history of the event. Second place went to the team representing Spain, Isidro Larrañaga and Andres Fernandez, and third place went to Argentina, Eduardo Fadda and Edgardo Ratto. The team representing the United States, Tiburcio Sarratea and Frank Vargas took a very respectable fifth place. Besides all of the tournament play, the muslaris and their companions were also treated to a full week of activities, excursions, and meals. Zorionak dener!

On October 5th, the Basque Educational Organization at the San Francisco Basque Cultural Center will host another installment of its Basque Film Series. This week's featured movie is Las brujas de Zugarramurdi (The Witches of Zugarramurdi). The film is an "absurd, racy comedy starring a group of desperate thieves who rob a Cash-For-Gold Shop in Madrid's Puerta del Sol." Directed by Alex de la Iglesia, it is in Castilian with English subtitles, and will begin at 7:30pm. For more information, or to watch the trailer, visit their website.

The next 8HZ Radio Show will air this Sunday, October 7th at 11am (PST). You can participate in the broadcast via email radio8hz@gmail.com or by phone +33 (0) 559596030. Join in this week for a chance to win a Luken shirt. The program, the Basque Diaspora's monthly radio show, airs on the first Sunday of each month in four languages. Tune in and find out what it's about. 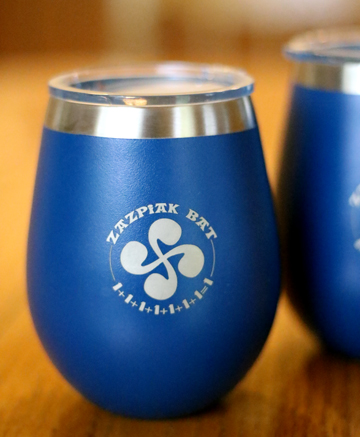 If any of you attended the 2018 Udaleku final performance on July 20th, or the Reno Basque Festival on July 21st, you may have already seen/purchased one of the wine tumblers seen here. The Zazpiak Bat Basque Club, with the help of Lisa Corcostegui, designed this wine tumbler to sell as a fundraiser for the club. Having been successful, the company behind them, Rootblue, reached out to us to provide other Basque club's and entities the same opportunity. The company that has Reno roots aims to provide affordable products that benefit the planet, and donates 10% of its proceeds back to the environment. For more information on their products, or about the company itself, visit its website.