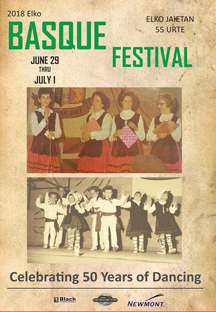 This weekend the Elko Euzkaldunak Basque Club will celebrate its 55th Annual National Basque Festival at its clubhouse (1601 Flagview Dr, Elko, NV 89801). Festivities will begin on Friday night June 29th with a kick off at The Ormaza Block (across from the Star) beginning at 5pm. The kick-off is a teaser of events to come including performances by the Elko Ariñak Dancers, and Basque sports exhibitions. There will also be a special performance by Basque Country musicians Xabi Aburruzaga and Aitor Uribarri. Saturday events begin on June 30th at 7am with a 5k run followed by the annual parade beginning at 11am. After the parade, the action will move to the Basque clubhouse again for an afternoon filled with events, food and drink beginning at 1pm, including more music by Xabi Aburruzaga. Several dance groups and athletes will be performing throughout the day including weightlifting, wood chopping, tug-of-war, and more. The public dance will begin at 9pm, again to the music of Xabi Aburruzaga with a special performance by Melodikoa (Mercedes Mendive et al). Sunday will begin with mass at the clubhouse at 11am. The festivities resume at 1pm again with Xabi Aburruzaga and Aitor Uribarri, more food, drink, dancing, and herri kirolak. For complete information, including meal prices, visit them on Facebook. 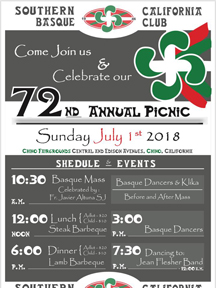 The Southern California Basque Club will celebrate its 72n Annual Picnic on Sunday July 1st at the Chino Fairgrounds (Central and Edison Avenues, Chino, CA). The day will begin with mass celebrated by Fr. Javier Altuna at 10:30am followed by a BBQ Steak lunch. Entertainment will be provided by the Basque dancers and Klika before and after mass, including a formal dance performance at 3pm. After an afternoon of socializing and Basque fun, a BBQ lamb dinner will be served at 6pm, followed by a public dance to the music of the Jean Flesher band from 7:30pm-midnight. For complete information, including meal prices, see their poster here. 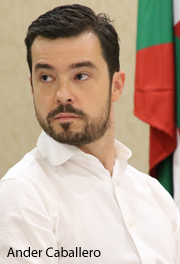 We were notified at the Winnemucca, NV NABO Convention meeting that our good friend Ander Caballero was stepping down as the Delegate of Euskadi in the United States. This was very sad news in our community, because during his tenure as delegate, Ander made many friends in many of our Basque communities across the country. We have now been notified that the Basque Government's Governing Council has approved his replacement, Jorge Fernandez Quintela. This appointment will go into effect as soon as it is published in the Official Bulletin of the Basque Country, which is expected to happen soon. While we look forward to meeting and working with Jorge, we wish Ander all the luck in his new endeavors, and hope that he will not be a stranger. On behalf of everyone at NABO, a heartfelt Eskerrik Asko to Ander for all of your support over the years, and Ongi Etorri to Jorge. Zorionak bioi!