The New England Basque Club is getting ready for its biggest event yet, a Basque Festival in New London, Connecticut. The festival is set for June 23, 2018 and will include various activities to celebrate the Basque culture including Basque rural sports, a Paella tasting with the participation of various chapters of the NEBC, Basque dance and music performances, a Mus Tournament and much more. Tickets for the event are available here, and everyone is encouraged to purchase them before they sell out. More information and updates will also be available on their Facebook Page. 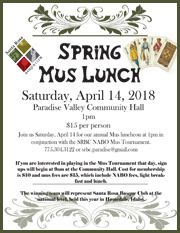 The Santa Rosa Basque Club invites everyone to join them this Saturday, April 14th, at the Paradise Valley Community Hall for its annual Spring Mus Tournament and Lunch. Mus registration will begin at 9am at the community hall. Cost for membership is $20 and mus fees are $15, which includes NABO fees, a light breakfast and lunch. The winning team will represent Santa Rosa at the national tournament in Homedale, Idaho on June 2, 2018. You can also just join them for lunch at 1pm, at the cost of $15 per person. More information is available by emailing: srbc.paradise@gmail.com. 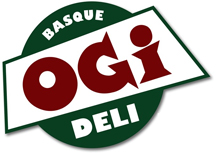 Our friends at the Ogi Deli, in Elko Nevada will be featured on an upcoming episode of State Plate on Monday April 16th at 4:30pm (PST), on INSP TV. This channel is on Dish Network channel 259 and DirectTV Channel 364. In this segment, the show's host, Taylor Hicks, will cook a Basque dessert and learn more about the Basque culture at this establishment owned by Ana Marie and Mikel Lopategui. Tune in and see what all of us outside of Elko are missing out on! Zorionak deneri! 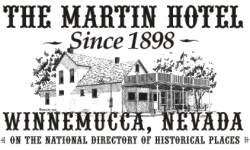 The Martin Hotel in Winnemucca will now open a second location in Carson City. The restaurant's owner, John Arant, told the Nevada Appeal that Carson City and the Martin would make a good match. The Carson venue will feature the same menu as the Winnemucca restaurant, and the dining rooms will also be identical, including photographs by Linda Dufurrena, and paintings by Gordy Glazier and Teddy Swecker. Arant expects to employ 25 people or so at his new locale. More information about the new restaurant is available in this article in the Nevada Appeal. On Egin!