Did you know that as part of NABO's role in maintaining and preserving the Basque culture in North America, that it also sponsors two financial aid programs for clubs and individuals? The first program, the Aita Tillous Fund, was established in the memory of Aita Marcel Tillous who served the Basque community for several years as our Basque chaplain. These funds are available to youth wishing to participate in any program geared towards our youth, Udaleku, Gaztemundu etc. For folks wishing to send their children to Udaleku, who may not be able to afford it, visit this link for complete information. These funds were also used this year to subsidize the youth who participated in the Smithsonian Folklife Festival.

The second, and newer program, is a revolving loan that is also known as CARL – Cultural Activities Revolving Loan. This fund was established to provide seed money for cultural projects and activities in clubs who may not have enough capital to front all the costs on their own. The idea is that this is a loan, and after an event is held, the proceeds from such an event could be used to reimburse NABO. If your club has hesitated to hold events simply due to the lack of funds, then CARL is for you. Complete information can be found here or by emailing loan@nabasque.eus.

The 39th Annual International Mus Tournament of Basque Collectivities began on October 8th and will run through the 15th in Donostia hosted by the Territorial Mus Committee of Euskadi. The events will mainly take place at the Kursaal in Donostia-San Sebastian, but there will also be games played in Zarautz and Tolosa on days that include visits to those towns. NABO is being represented by a team from the Fresno Basque Club, Tony Campos, and Pedro Sanz. They are accompanied by delegates Pierre Etcharren and Jose Urrutia. Daily updates are being posted on the NABO Facebook page, as well as on the host's site. Zorte on gure muslariei! 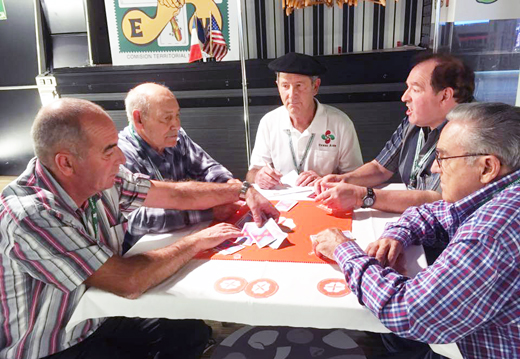 It is now the Euzko Etxea of New York's turn to host the film Amama and its producer Asier Altuna. If you haven't had a chance to see this film yet, and are in the area, please join them this Saturday, October 15th at 7:30 at the clubhouse (307 Eckford Street Brooklyn, NY 11222). For the event, the bar will open at 7pm with the film beginning at 7:30pm. After the movie there will be a Q&A with the director, and pizza will be served. For complete information or to make reservations, click here.

Below are some photos from the William A. Douglass Center for Basque Studies' screening at the University of Nevada, Reno on October 11.