The Basque Museum & Cultural Center has published a job ad for the Director's position at the Boiseko Ikastola, a Basque language immersion preschool. The Boiseko Ikastola, the only Basque preschool in the United States, strives to provide a warm, safe, supportive and stimulating environment for preschool children and their families. Their aim is to successfully prepare children for Kindergarten and elementary school by promoting growth in social, emotional, physical and cognitive development, while sharing the Basque culture by incorporating the Basque language in everyday learning. Interested persons should send a cover letter, resume, and references to the Basque Museum (611 Grove Street, Boise, ID 83702 – attn.: Executive Director) or via email: annieg@basquemuseum.com. Deadline to apply is July 15th. The full job description is also available here.

Udaleku 2016 Edition Just Around the Corner 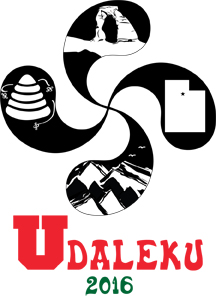 The Basque Club of Utah is finalizing the details for Udaleku that will begin this Sunday, July 10th in Salt Lake City. This year's Udaleku has 81 children participating from several of our NABO Basque clubs. During their two weeks in Salt Lake City, the children will receive instruction in Basque culture, dance, txistu, sports and cuisine with a focus on the province of Gipuzkoa. Campers will be hosted in local families, with camp being held at the St. Vincent de Paul Parish and School (1375 E Spring Ln., Murray, UT) with instructors participating from the Basque Country as well as the US. Campers will also be treated to fieldtrips to Lagoon Amusement Park, Snowbird Ski Resort, and will also have a swim party with their host families. Drop off will take place on Sunday the 10th between 4-7pm and a BBQ will be provided for folks who choose to stay. The final performance will take place on July 22nd at 6:30pm also at St. Vincent's. Wishing everyone a very successful camp! Sorte on!

Congratulations, Zorionak to the Southern California Basque Club on hosting such a wonderful NABO Convention. The weekend included the summer NABO meeting on Saturday, along with NABO's Jr. Mus Tournament on Saturday afternoon. Tournament winners were Elena and Jeanine Duhart, and second place went to Matthew Jaureguy and Martin Almirantearena. Zorionak! These events were followed by a dinner/dance to the music of the Jean Flesher Band, and a special concert by Gatibu. During dinner, several long-time club members were recognized and we were also treated to a wonderful video on the 70 years of the club's existence. Sunday began with mass by Fr. Altuna with the dancers and Klika participating. Sunday afternoon included dance performances by the San Francisco Zazpiak Bat Dancers, as well as all of the Chino Basque club dancers, Gauden Bat, Xori-Ttipiak, Euskaldun Izarrak and the Dantzari Onestak. This was followed by the NABO Bizi Emankorra awards being presented to Jean Baptiste Aguerre, Xavier Aphessetche, and Jean Baptise Bidegaray. NABO also held its annual Txerriki contest. Winning in the Lukainka category was Bernard Goyhenetche from the Iparreko Ibarra Basque club, and in the Tripota Category, Marin Sonoma Basque club won. The afternoon then continued with a special performance by Gatibu, and another dance to the music of the Jean Flesher Band. Thank you to So. Cal. Basque Club for all of your hard work! For those who couldn't attend in person, please enjoy some photos of the highlights.

The Smithsonian Folklife Festival will resume on July7-July 10th. For a complete schedule of events click here, and for a recap on the festival's first week, complete with photos and videos, visit EuskalKultura.com.