As many may already know, the SD Eibar soccer team is touring the US and will be playing in Philadelphia and Las Vegas. Last night they were hosted at a meet and greet at the New York Euzko Etxea on their way to play the Philadelphia Fury on May 22nd. Their next match will take place in Las Vegas on May 25th against the New York Cosmos. The local Lagun Onak Basque club has organized a meet and greet with the players on Monday, May 23rd at 6pm. If you would like to attend please visit them on Facebook, or email them at: lagunlv@gmail.com and please indicate how many are in your group. For the occasion Eibar also made a great video that can be seen here.

New Window Exhibit at the University of Reno, Nevada 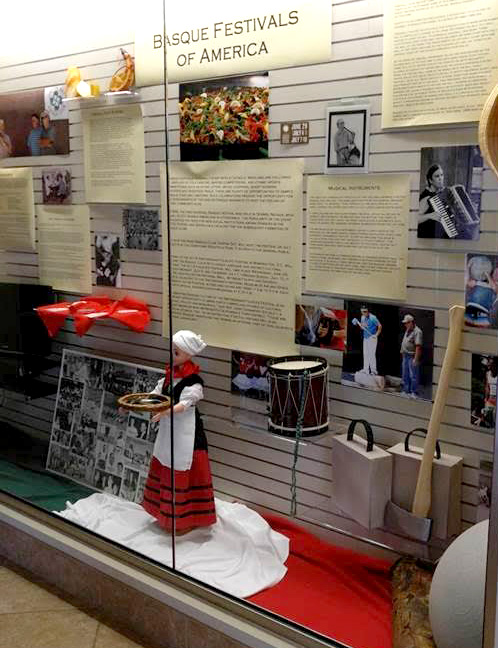 The Jon Bilbao Basque Library at the University of Nevada, Reno has recently inaugurated a new window exhibit, Basque Festivals of America. The exhibit includes information about cultural activities that take place at Basque festivals around the country. It highlights Basque instruments, festival food and drink, Mus, and Bertsolaritza, as well as typical sporting events also seen at festivals like pelota, and Basque rural sports. The exhibit also features a video compiled from several events at various festivals in several states. It can be seen in the lobby of the library on the third floor of the Knowledge Center and was designed by Shannon Sisco (Library Technician) with the help of student workers, Jessica Ramirez and Joelle Ourtiague. Come check it out!

The prestigious Seattle International Film Festival begins tomorrow, May 19th and runs through June 12th. The festival features a wide-range of films, across all genres and budgets from blockbusters to independent and international films. This year, the Basque film Amama by Asier Altuna will also be featured. The film "explores Basque farming traditions through a family that is struggling to maintain their disappearing traditions." For more information on the film, its director, for show times and to buy tickets click here.

This weekend's lead up activity for the Smithsonian Folklife Festival "Innovation by Basque Culture," is the third and final installment of Txotx! on May 22nd from 6:30-9pm at the Colony Club, 3118 Georgia Ave. NW. The event will feature Mercedes Mendive, accordionist from Elko, as their guest performer. Cost of the event is $25 and includes pintxos and unlimited cider. For complete information on this event, as well as the story behind Txotx, visit their Anxo's website.