It's already time to start thinking about our 2017 NABO Calendar. Please submit dates for your club activities to Mary Lou Urrutia by June 10th along with any photos that you might have for consideration. Photos may also be uploaded directly to the NABO website. If you have any calendar questions, please write to Mary Lou directly, and for help with uploading, contact Lisa Corcostegui.

The Santa Rosa Basque Club will host its annual Mus Tournament on Saturday, April 23 at the Paradise Valley Community Hall. Registration will begin at 9am, and tournament play will begin at 10am. Cost for members is $25 and non-members is $45 that includes a light breakfast and lunch. After the tournament there will be a Mus Dinner. Cost of the dinner is $30 and RSVPs can be made to Richard or Susan Gavica by calling 775.578.3533 or by emailing srbc.paradise@gmail.com by April 20th.

Benito Ysursa to be Recognized as Favorite Son of Iurreta 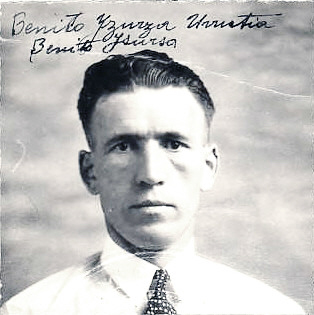 Benito Ysursa Urrutia, grandfather of John Ysursa, is being honored this Friday, April 15, 2016 in Boise by the mayor of his hometown, Iurreta, Bizkaia, Iñaki Totorikaguena, as one of the town's favorite sons.

Benito was born to Jose Maria Ysursa Artabe and Clara Urrutia Lejarreta at the Iturburua farmstead in Iurreta in March of 1895. He left Bizkaia in 1915 and established himself in Boise, Idaho where he owned and operated the Sinker Creek Sheep Company as well as the Valencia and Modern hotels. Benito became an American citizen on September 10, 1935. During WWII he served with an all-Basque volunteer reserve unit. He was known for his love of the Basque Country, as well as his efforts to maintain the Basque culture in the United States, not only with his family, but also with the entire Boise community. Benito passed away in 1984 at the age of 89.

While in Boise, the mayor will explore strengthening relations between the two towns, including possible cultural exchanges with the Oinkari dancers. To read more about this click here. Zorionak dener!