The Gooding Basque Association held a special club dinner on April 1st that gathered 100 people. Dinner was served at 6pm and afterwards, there was a sing-along led by NABO Euskera Coordinator, Itxaso Cayero, and former Euskera coordinator Izaskun Kortazar. Itxaso and Izaskun led the group in practicing the melody first, and then they tried it with the lyrics. In all, they sang 10 songs in Basque, and everyone seemed to have a great time. Thanks to Itxaso for sharing some great pictures of the evening with us.

This Friday, the Basque Educational Organization will hold another installment of its Basque Film Series with Xalbador a film about the iconic bertsolari, directed by Eneko Dorronsoro. The film is in Euskera with English subtitles. The free event will begin at 7:30pm at the San Francisco Basque Cultural Center, and will include a special introduction by Johnny Curutchet. For complete information visit their website. 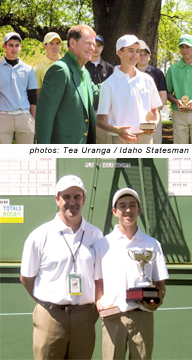 Daniel Uranga, son of Jennifer and Tony Uranga of Homedale, took away two trophies last Sunday from the Drive, Chip and Putt Championship held at the Augusta National Golf Club in Augusta, Georgia. The event, established in 2013, aims at growing the sport by focusing on fundamental skills. It is held annually at the Augusta National Golf Club the Sunday before the Masters Tournament and is broadcast live by the Golf Channel. Daniel took first in the putting competition and took second overall, out of the 80 boys and girls competing in his age bracket. Besides meeting Tom Watson who presented him his putting trophy, Daniel also had the chance to meet Lou Holtz, Adam Scott, Bubba Watson and Matt Kuchar. Troy Merritt, PGA pro from Meridian was also in attendance. More information about the event is available here. Zorionak Daniel!