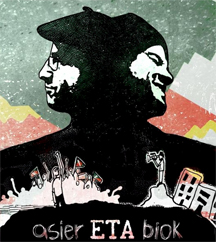 The Basque Educational Organization is hosting a film screening this Friday, March 11th at the San Francisco Basque Cultural Center, beginning at 7pm with a meet and greet, and the film starting at 7:30pm. The featured film, Asier ETA Biok directed by Aitor Merino and Amaia Merino, tells the story of childhood friends from Pamplona who took different paths in life. The film is 94 minutes long and is in Basque and Spanish with English subtitles. Dr. Xabier Irujo from the William A. Douglass Center for Basque Studies will present the film. For complete information visit the BEO's website. 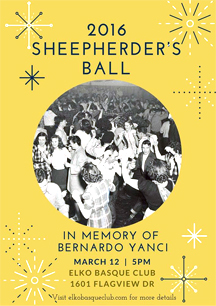 The Elko Euzkaldunak Basque Club will be celebrating its Sheepherder's Ball, in Memory of Bernardo Yanci, this Saturday, March 12th beginning at 5pm at the clubhouse (1601 Flagview Dr.). Cost of the dinner is $12 at the door. Dinner will be served at 6pm with dancing to follow to music provided by Mercedes Mendive, Ana Maria Lopategui and Jean Flesher. On Sunday, March 13th, they will also host their annual Mus Tournament, also at the clubhouse. Registration is at 8am with tournament play beginning at 9am. For complete information see their website or visit them on Facebook.

We would like to congratulate the town of Gardnerville and the Mendiko Euskaldun Cluba for their part in a mural that was unveiled this week. The mural, that celebrates Gardnerville's Basque heritage, is the result of years of work and collaboration between the club, artist Beverly Caputo, the Masons, and many others, along with funding from several local businesses. For more information, here is an article that appeared in The Record Courier.

The Boiseko Ikastola has partnered with the Idaho Stampede Basketball Team for a Fundraiser this Friday, March 11th. Discounted tickets to the game are available here, and $5 from each ticket will go directly to the Ikastola. Ikastola students will also have the opportunity to visit the court and building the day of the game, and will participate in the High Five Tunnel as well. If you are too far away but would still like participate, you can purchase tickets for the Ikastola students to attend for free. In this case please contact Jaster Sparks with the Idaho Stampede at 208.287.3812, or Annie Gavica at the Basque Museum at 208.577.2250.