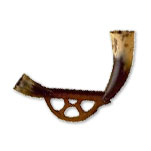 One of the more distinctive of Basque folk instruments, the alboka was an instrument that was once widely played but that in recent years began to disappear before fortunately a re-emergence of interest--especially among the young.

The alboka is kind of clarinet with a double bored pipe, two horns and two cane reeds. It is actually more like two musical instruments in one or one attached to the other.

To play the alboka air has to be blown out non-stop, similar to the bagpipes or xirolarru. However the alboka has no bag to store up air, instead using a system of turning the air around, that is, taking air in and blowing air out at the same time (circular breathing). To learn this technique a straw or slender cane is placed in a glass of water. The idea is to blow into one end of the straw, continuously creating bubbles in the water. Another exercise consists in covering the small horn with a "txapela" or Basque beret and blowing air into the horn forcing it through the txapela filter.

The name of the instrument appears to be derived from the Arabic "al-bûq" (البوق) (literally "the trumpet" or "the horn"). The instrument was originally native to Asia and may have been brought into Iberia by the Arab conquest. It was evidently already established in Spain by the time of the 13th-century "Poema de Alexandre," in which it is mentioned by name, and there are apparent representations of the instrument in surviving medieval sculptural church decorations. 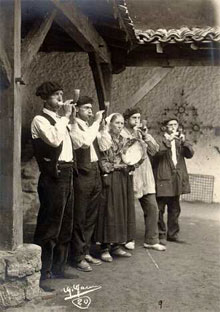 It is difficult to say when, where and how the alboka made its appearance in the Basque Country. Below are passages from a few documents referring to the alboka: "Mondragón, 1443. Tamboril, albokas and panderos were used for dancing and singing. / Duranguesado, 1777. ...as it may not be appropriate to interrupt the five o'clock summer tamboril and alboca sessions, and the two o'clock winter sessions... / 1826. Some of the old Christmas verses sung in Biscay mention the 'albokia'." (Padre Donostia, 1952).

Even without the help of any additional early documentation there is no doubt that the alboka has been used in the Basque Country for centuries. In recent years the instrument has suffered an important decline, but if we pay attention to the information to be found in studies today (and here we should point out two books written on the alboka by J. M. Barrenetxea), we see that the instrument was used up until quite recently in

Bizkaia, Gipuzkoa and Navarra-in the Arratia valley in the foothills of Gorbea range; in the Duranguesado region; from Oñati at the foot of Aizkorri to Otzaurte; in Mondragón and in Urbasa. We also have information on the existence of alboka players on the coast of Gipuzkoa, particularly in the towns of Deba and Aia.

In the Basque Country the repertory generally consists of fandangos, jotas, arin-arin porrue and marches. Although a number of familiar melodies are played, albokaris (alboka players) tend to add their own personal style to the music they play. This explains why today there are dozens of versions for every tune. This instrument is associated with the tambourine and verses. The tambourine helps to mark the rhythm in dances, and most of the tunes have a special part for verse singing.

Alboka in the United States

The alboka is re-emerging as a new generation of players have taken up the instrument. One such player is Idaho's Miren Aizpitarte (right) who taught herself the instrument:

It was the beginning of her Sophomore year when she learned to play the unique, rare instrument called Alboka.  She is self-taught on the instrument and plays it for the Oinkaris and the local Basque band "Amuma Says No." Recently, Miren has had the opportunity of traveling to Ellis Island and Shanghai, China with the Oinkari Basque Dancers.  She was able to represent her culture by dancing and playing the alboka for the opening of the Basque immigration exhibit in Ellis Island, and for the World's fair in China.