The 5th World Basque Congress of Basque Collectives assembled around 80 delegates from 22 countries attending along with special guests of the Lehendakari, speakers, winners of the Andrés de Irujo awards, and participants of the Gaztemundu program, among others. 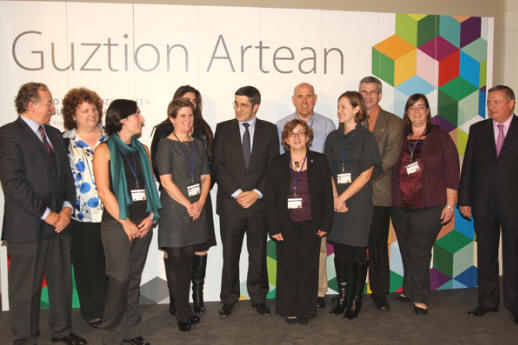 
Conclusions of the V World Congress

2. - Grants for current expenditure, activities, infrastructure and equipment:
We advocate for the Basque Government continued support to the Basque Centers and consider its extension, to the extent of available funding, under the growing number of recognized Basque Centers, while increasing human and financial resources needed to meet the new realities.
We ask for a shortening of the deadlines for resolution and payment of aid for development projects can be carried out in the terms presented.
We ask that you remove the limits of adjudication that have been applied to federations.
We request that the assessment criteria for subsidizing projects be more simple, transparent and objective in relation to the activities of each and every Euskal Etxea Federation.

3. - Aid for families in extreme need
Mutual aid being the founding objective of most of the historic Basque centers, we propose the continuation of the program of aid to these families [not really applicable to Canada and the United States]
In addition, we request to study the feasibility of adopting a system of private insurance to cover the care needs of members of the Basque centers.

4. - Program Gaztemundu
We stand for establishing a four-year calendar so that each year the program is intended for the following topics:
2012: Euskara
2013: Music
2014: Dantza
2015: Management of cultural organizations, coinciding with the Sixth Congress.

5. - Call for cultural tours
We advocate giving continuity to this call to the Basque centers to have access to cultural events, upscale modern and higher order.
Also the possibility of exchange tours conducted so that cultural events that occur in the orbit of the Basque centers can be presented in Euskadi.
Also consider the possibility of incorporating training area in this section.

6. - Holding regional meetings between world congresses
We suggest the need for regional meetings that can be carried out between congresses, for the maintenance and strengthening contact with the Basque Government and between the Euskal Etxeak
We also request technical visits for training and support in developing grant applications for the different programs.

8. - Helps people in a position to return
We request the examination of individual performance to return [to Euskadi], and also delve into the care of Basque citizens abroad and the role of "office" which also has to make the current address for citizens and Basque communities abroad .

9. - Historical Memory and publications
We propose to continue the program Urazandi collection of historical memory, continuing phase of Basques in the American press.
We ask that you make the necessary efforts for the collection of oral testimonies, epistolary and photographic, which can be of enormous importance for the future of our Basque centers.

10. - Platform for Basque companies
We advocate to value the knowledge that Euskal Etxeak have in their countries and to support dynamic Euskadi internationalization, both local businesses as well as Basque businesses.

11. - Voting abroad
We want to inform the Basque Government for transfer to the competent authorities, the concern in the Basque communities abroad about the difficulties in exercising the right to vote.

12. - Observers on the Advisory Board
We ask the Advisory Council to allow attendance at its meetings of 3 young people from the Basque community as outside observers.